The not so beautiful game 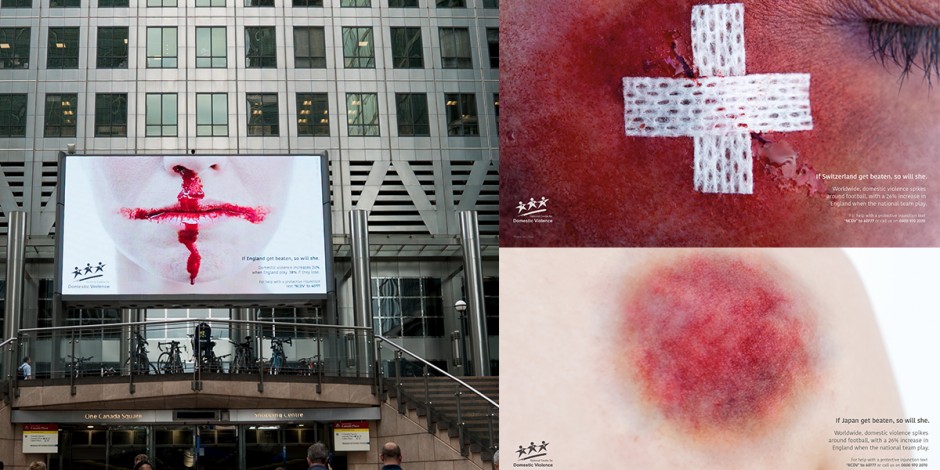 J Walter Thompson London’s visceral posters portraying country flags as the wounds of domestic abuse have been shared well beyond their media plan, shocking and educating the public on the link between football and violence in the home. But if it hadn’t been for the confidence of its creators, the work may not have been seen by anyone.

‘The Not-So-Beautiful Game’ is a true piece of proactive, reactionary work. Maya Halilovic, a creative at JWT, was flicking through tweets tagged with the World Cup hashtag during the earlier stages of the tournament when a piece of research caught her eye: reports of domestic violence increase 26% when England play and 38% when England lose.

Immediately she turned to her colleague Jo Taylor and began to discuss the shocking statistics. Jo began to scamp up the image forming in her mind’s eye – blood forming into the shape of the St George’s Cross. The visual, proved its power almost immediately. A team was pulled into the project, the concept was signed off by their executive creative director midway through Cannes and the idea began to develop.

JWT was eager to present the work to long-standing client the National Centre for Domestic Violence (NCDV). But there was one problem – the client was on holiday and unreachable.

The National Centre for Domestic Violence provides emergency legal injunctions for victims. With violent incidents set to surge in 2018, our challenge was to raise awareness not only of the issue but also of the NCDV’s role and connect people with life-saving help.

In the UK, domestic violence cases spike during World Cup football: reported incidents increase by 26% when England play…and 38% when they lose. Similar data and statistics are shockingly common in nations all over the world.

“If England get beaten, so will she.”

Our alarmingly honest, authentic design-led solution hijacked football culture, subverting the behaviour of fans adorning their bodies with their teams’ national flag by reimagining these flags in the form of realistic wounds and bruises across victims’ flesh. In doing so we purposefully increased the visceral reaction to an already-emotive symbol, interrupting the football debate and provoking much-needed conversations around domestic violence and how to seek life-saving help.

The success of the campaign was measured entirely by the growth of one outcome: the action against this needless emotional and physical violence.

Most importantly, the NCDV saw a 20% increase in calls for help including the reporting of domestic violence cases, as well as a 1,250% growth in awareness and sharing of the message across social media.

More organically, we grew the distribution and scale of the communications platform from which NCDV could reach its audience and the campaign was adopted by UK police and London healthcare services.